Hard as it is to believe, it’s been nearly a year since I travelled to New York to participate in the inaugural UL Frank McCourt Creative Writing Summer School.   As it was the first of its kind, we weren’t sure what to expect, but our bravery was very well-rewarded.   Our time at New York University proved to be an incredibly rich and gratifying experience; we reconnected with our lecturers from UL’s Creative Writing department (who also happen to be leading literary figures), met fascinating people from all over the world, and participated in inspiring workshops and lectures every day.

We learned about short story writing from Donal Ryan (of Booker-Prize-nominated fame, author of The Spinning Heart), enjoyed a musical reading from Professor Joseph O’Connor’s Ghostlight (the Pen-Award-winning author of my beloved Star of the Sea), accompanied by legendary musician Martin Hayes.  We listened to an engaging lecture on pop culture (and Oscar Wilde!) by Prof Eoin Devereux, and found ourselves captivated by the fountain of knowledge that is the poet (and member of the Aosdána), Mary O’Malley.  Renowned author, lecturer and journalist Giles Foden hosted workshops, generously lending his famously incisive advice to the participants.  Of particular interest to us recent graduates was a practical and thoroughly useful series of lecturers by acclaimed young adult writer Prof Sarah Moore Fitzgerald, who taught us, in her inimitable way, to get up off our backsides and get the words down on paper.  No excuses.

And of course, no Irish trip to New York would be complete without a trip to McSorleys to wrap it all up.  Although we told ourselves it was more about the history than the pints…

Moreover – and this would have been hard to explain to my twenty-something self – the sense of freedom was indescribable.  I adored being in New York City during a hot, heady July, attending NYU every day, basking in all things literature-related.   Like most people, my everyday life in Ireland is much more mundane: suits and spreadsheets are the order of the day.  For one week last year, I was young, carefree and thirsting for knowledge, in a city that bristles with energy.  Such sensations are increasingly rare as we get older, and are to be treasured as a result.

If you have any inkling at all to sample some of the same, get thee on a plane.  Official details below. 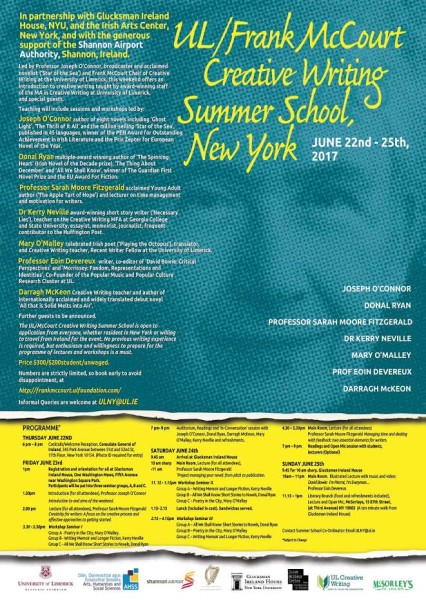 Welcoming the announcement of the 2017 programme, UL President, Professor Don Barry remarked: “The UL Frank McCourt Creative Writing Summer School in New York links two literary worlds – on the banks of the Shannon and the shores of the Hudson – that fired our much-missed Frank’s imagination. The very promising 2017 programme will draw on his unique legacy to inspire new generations of creative writers”.

UL Professor of Creative Writing, Joseph O’Connor, added: ‘The Summer School oﬀers a taste of Creative Writing as we teach it at UL, with the emphasis on enjoyment, collegiality, mutual respect and love of words, in a community of writers working together. We hope the fine range of authors we’re offering this year will make it an experience to remember.”

Highlights will include readings by JOSEPH O’CONNOR, broadcaster, playwright and author of eight novels including the million-selling ‘Star of the Sea’.  Booker Prize-longlisted DONAL RYAN, author of ‘The Spinning Heart’ (recently voted Irish Novel of the Decade) will reveal the secrets of writing captivating short stories. Acclaimed Young-Adult author and UL professor SARAH MOORE FITZGERALD will outline those essential motivational and time-management tools that all writers need.

Celebrated Irish poet, MARY O’MALLEY, will offer exciting sessions on ‘Poetry and the City’, focusing on the streetscape of the Lower Manhattan/Greenwich Village where the Summer School has its base, and the counterculture of downtown NYC provides a vivid context for PROF EOIN DEVEREUX’s talk on long-time New York resident David Bowie.

KERRY NEVILLE joins us as this year’s special guest. Teacher, Huffington Post contributor and award-winning short-story writer (‘Necessary Lies’), Kerry is a dazzlingly talented wordsmith whose take on the creative process in our contemporary era is fascinating. Writer in Residence for the Summer School, DARRAGH McKEON, author of acclaimed debut novel ‘All that is Solid Melts into Air’, will be on hand to offer advice, answer questions, give his insights over coffee, share perspectives and respond to students.

Our Guest of Honour, ELLEN FREY McCOURT, Frank’s wife, remarks: ‘Three cheers to Shannon Airport Authority for continuing their enlightened support for the ambitious UL/Frank McCourt Summer School in New York.  In one divine stroke they have enabled the two things Frank loved most—teaching and writing.  Thank you also to Joseph O’Connor and his UL colleagues for putting it all together with NYU (Frank’s Alma Mater) Glucksman Ireland House and the Irish Arts Center. Frank would feel triply blessed.”

The Summer School is open to application from everyone, whether resident in New York or willing to travel from Ireland. No previous writing experience is required, but willingness to prepare for the programme is a must. Price $300/$200student/unwaged.  Numbers are strictly limited, so book early to avoid disappointment, at http://frankmccourt.ulfoundation.com/