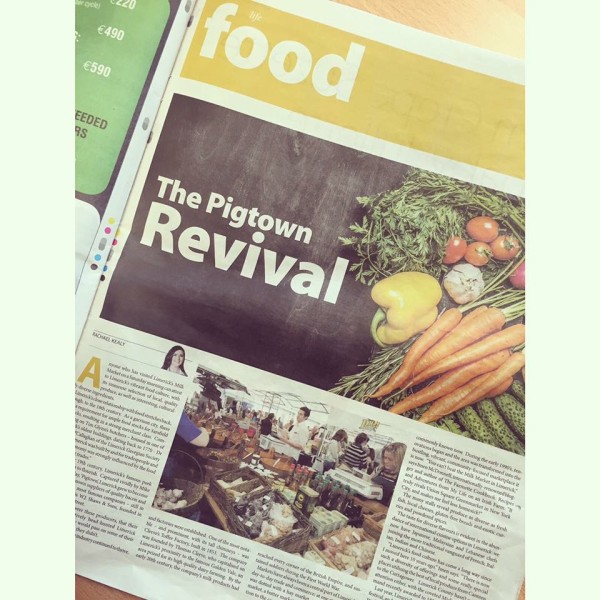 Anyone who has visited Limerick’s Milk Market on a Saturday morning can attest to Limerick’s vibrant food culture, with its immense selection of local, quality produce, as well as interesting, culturally-diverse ingredients.

Limerick’s close relationship with food stretches back, though, to the 18th century.  As a garrison city, there was a requirement for ample food stocks for Sarsfield barracks, resulting in a strong merchant class.  Commenting on Tim Glynn’s butchers – housed in one of Limerick’s oldest buildings, dating back to 1770 – Dr Ursula O’Callaghan of the Limerick Georgian Society wrote: “Limerick was built by and for tradespeople and its local economy was strongly influenced by the food provisioning trades.”

In the early 19th century, Limerick’s famous pork industry began to flourish.  Captured vividly by Mike Finn’s famous play, ‘Pigtown’, Limerick grew to become one of the best-known suppliers of quality bacon and ham.  One of the most famous companies – still in existence today – is W.J. Shaws & Sons, founded in 1831 on Mulgrave Street.  So well-respected were these producers, that their English counterparts actively head-hunted Limerick employees, hoping they would pass on some of their trade secrets.  Evidently, they didn’t.

The food-manufacturing industry continued to thrive, and factories were established.  One of the most notable – and prominent, with its tall chimneys – was Cleeve’s Toffee Factory, built in 1853.  The company was founded by Thomas Cleeve, who capitalised on Limerick’s proximity to the famous Golden Vale, an area prized for its high quality dairy farming.  By the early 20th century, the company’s milk products had reached every corner of the British Empire, and sustained soldiers during the First World War.

Markets have always been a central part of Limerick’s day-to-day trade and commerce; at one stage, the city was dotted with a hay market, a cattle market, a pig market, a butter market and a potato market, in addition to the corn market, or milk market, as it is more commonly known now.  During the early 1990’s, renovations began and the area was transformed into the bustling, vibrant, community-focused marketplace it is now.  “You can’t beat the Milk Market in Limerick,” says Imen McDonnell, internationally-renowned blogger and author of The Farmette Cookbook: Recipes and Adventures from My Life on an Irish Farm. “It truly rivals Union Square Greenmarket in New York City, and makes me feel less homesick!”

The many stalls reveal produce as diverse as fresh fish, local cheeses, gluten-free breads and exotic curries and powdered spices.  The taste for diverse flavours is evident in the abundance of international cuisine options in Limerick: we now have Japanese, Malaysian and Lebanese chefs joining the more traditional vanguard of French, Italian, Indian and Chinese.

“Limerick’s food culture has come a long way since I moved here 10 years ago,” Imen says. “There is now such a diversity of offerings and some really special places utilising the best of local produce from Canteen to the Curragower.   Limerick County hasn’t escaped attention either, with the coveted Michelin Bib Gourmand recently awarded to 1826, Adare.

Last year, Limerick celebrated a ‘Culture and Chips’ festival, and the recent Riverfest saw dozens of market-traders travelling from across the continent to sell their wares to a welcoming audience.  Next month, the Urban Food Fest is set to showcase street food in the city centre.  The city’s three-hundred-year appreciation for good food and quality ingredients is showing no signs of slowing down.