Book Review: That Part Was True by Deborah McKinley 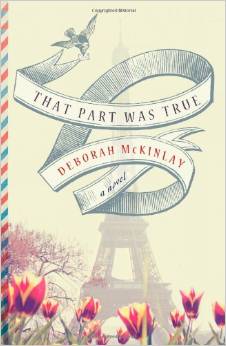 I described this on Twitter as being an easy, light-hearted summer read, and I still think that’s the most accurate, albeit concise description I can come up with for ‘That Part Was True’ by Deborah McKinley.

Set over a short period, this is very much a brief snapshot of two lives, told partly through letters exchanged between the two main protagonists. Eve Petworth is a middle-aged, painfully shy woman living alone in very comfortable surroundings with little to occupy her but regrets over a failed marriage, bullying mother and resentful daughter. Oh, and a love for cooking.

Cooking is what unites Eve with Jackson Cooper, a brash, Hemingway-esque writer character of action novels with a fondness for good beer and even better steak.   Also separated from his latest partner, he is a little adrift, unable to write very much and unsure of how to proceed with his newly single life.

Eve, a little incongruously, is a fan of Jackon’s work and writes him a short note telling him that one the scenes – in which his lead character eats a peach – reminds her of the joy of eating fresh fruit on a summer’s day.

So begins a correspondence in which both Eve and Jackon offer each other advice, encouragement and the gentlest of flirtation. It is a love affair for grown-ups, a sedate meandering through the idea of second chances later in life. While a little hard for me to empathise with (being not quite thirty), the writing was engaging and the characters well-drawn, helping the reader to better understand their regrets, their worries and their hesitancy to proceed.

The book has just been optioned and I think it could make a lovely film, along the lines of ‘Somethings Gotta Give’, or ‘It’s Complicated’. Let’s hope they can get Nancy Meyers on board.

The ending was satisfying and neatly-tied together, nicely rounding off an engaging, relaxing little book. One for the beach, if you’re heading that direction for a late summer jaunt.