Writing Through The Digital Noise

I’m writing this during a power outage.  It’s just me, the dark and the last gasps of a dying laptop.  It’s actually perfect, because I have nothing else to do except write, albeit for only 33 minutes more, according to my laptop battery.  I’ve been sitting at the kitchen table for an hour now with just the flickering light and sickly sweet scent of an aromatic candle burning next to me.

I haven’t been able to fuss over having my writing desk set up just right, as I can’t use it.  There are no distractions as my phone is dead and the wi-fi is down.   I can’t do any housework, I can’t cook, I can’t make tea and I can’t even listen to music.  There is no noise, not even the vague electronic hum we normally don’t even notice.   The only sound is my tapping and the ticking of the clock on the wall.

So far, in just an hour and a half, I’ve written 2,000 words.  That’s the same amount I normally write in a full day. 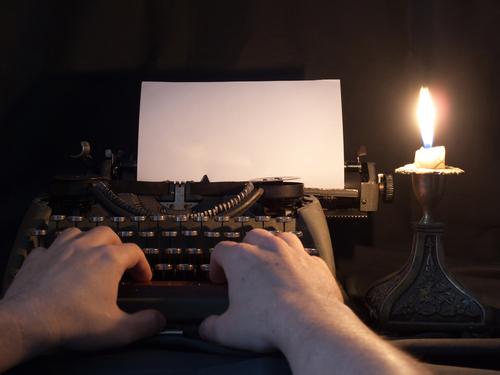 It reminds me that successful writers are the ones who manage to somehow put themselves in this same place every single day.  They have the ability to ignore their telephones, their tvs, their social media apps or any of the myriad other digital distractions available.  They just sit down and write, as if there was nothing else in the whole world.

It makes me think how much easier it must have been to produce a body of work years ago, before our lives became so busy with such….noise.

It’s easy to imagine Charlotte Bronte sitting down to write one day and emerging some six weeks later with a solid first draft of Jane Eyre.  She had little to do all day except watch over her recuperating father, and lose herself in a world of romance on the moors of Northern England.

Not so long ago, I attended a talk given by the novelist Belinda McKeon , author of the excellent and highly acclaimed ‘Solace’.  Endearingly modest, she spoke quite emphatically about having to try and find time, space and motivation to write in the modern world.

She knew that droplets of time had to be somehow wrung out of every day.  However, she was also very honest about the challenges of retreating from the endless barrage of modern distractions – Twitter, emails, texts, Facebook, etc. – to be able to write.

She also said that if she hadn’t completed a masters in Creative Writing, she may never have finished her book.  It was a wonderfully refreshing lecture, a frank admission that this successful, esteemed author faces just the same motivational challenges as the rest of us.     She also gave us some real, tangible advice; download an app called Freedom. It blocks your internet for a set amount of time, giving you little to do but actually get words down on paper.

Whenever I go to my parents’ place in France, I love that I can get some work done – real work, physical words and pages that pour from me as I have no internet, little TV and only as much telephone as the intermittent signal will allow.

That, and tonight’s power cut is a lesson.  I need to install that app, sit down at my plain old kitchen table with the laptop, and just get on with it.